What’s going on in my lawn?

Sometimes, despite your very best efforts, strange and (quite frankly – startling) things can appear in your lawn. Most of us can recognise issues with moss or weeds, but beyond that there are other issues that can creep into your lawn and it can prove difficult to first identify what they are and how to tackle them.

As the aptly named Grass People, we like to think we know most of the issues that could possibly crop up in your lawn, so we’ve gathered together the ones we get asked about the most!

Poa Annua disguises itself as an extremely broad-leafed grass, but once it begins to flower – you can be sure it is anything but. It is in fact a weed grass and it will stick out from the rest of your lawn like a sore thumb as an uninvited guest. Poa Annua seeds can lay dormant for years until they decide to crop up so there isn’t much you can do in terms of prevention. Applying a pre-emergence weedkiller could unnecessarily damage existing grass, so its best to tackle this weed when it first starts to make an appearance.

As it is a low growing weed, you’ll most likely notice darker patches of ‘grass’ in your lawn that appear thicker and will be resilient to a lawn mower. Following this, the weed will start to sprout buds that should make it more apparent that it is not welcome in your lawn! As Poa Annua typically grows in clumps, your first course of action should be to remove it by hand as best you can. This means actually digging the clump out. After this has been removed, you may wish to add quality top soil to level the area out and to eradicate any chance of the wretched weed grass returning! 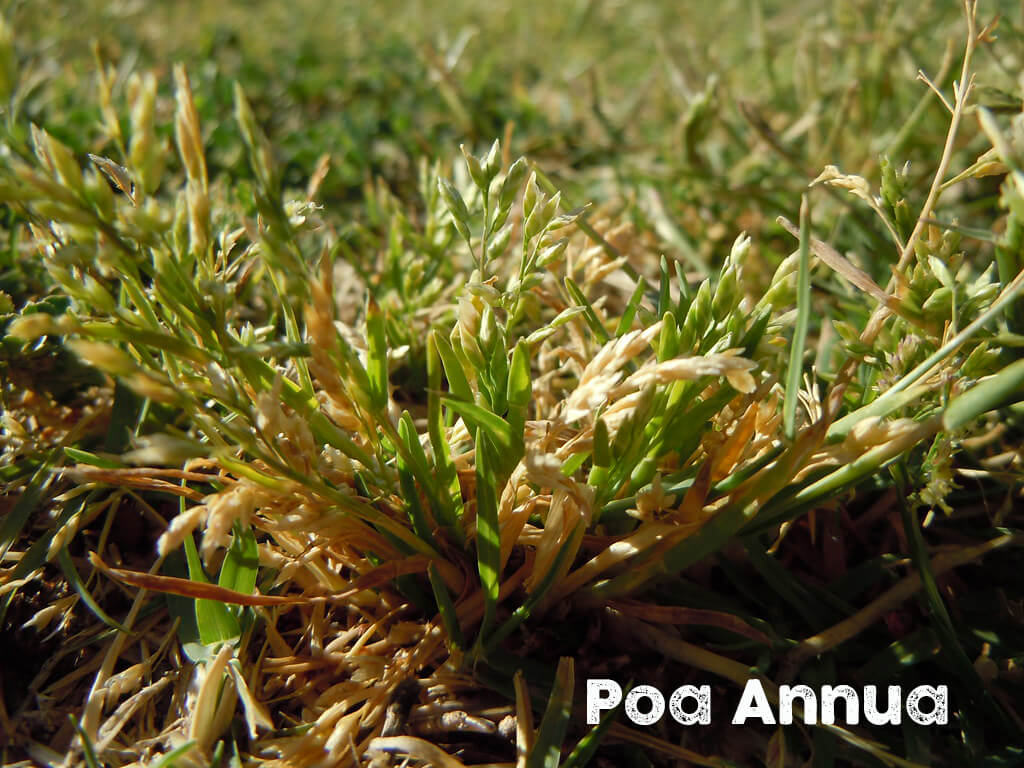 This disease can spread rapidly so it is best to treat the area as soon as possible. Unfortunately, there is no cure for seedlings should they become infected, so try to avoid sowing seed too closely together as this can increase the risk of damping off. Scarification and aeration will also help prevent the fungi from gathering at the roots of grass and plants.

Red Thread is a disease often found in lawns across the UK in late summer and autumn. At first, this looks like bleached patches of grass which later take on a pink tinge. If you take a closer look in damp weather, you will find small red needle-like growths amongst the grass blades, which give the disease it’s common name. Red thread won’t kill the turf, but it is unsightly until the bleached patches recover. If you notice these symptoms on your lawn, the best course of action is to apply a nitrogen rich fertiliser.

This is usually enough to deal with the problem, however there are other remedies available if this is not effective. Scarifying and aerating the lawn will clear the lawn of dead grass and moss, as well as allow for better drainage, therefore reducing the fungus present and the chance of re-infection. 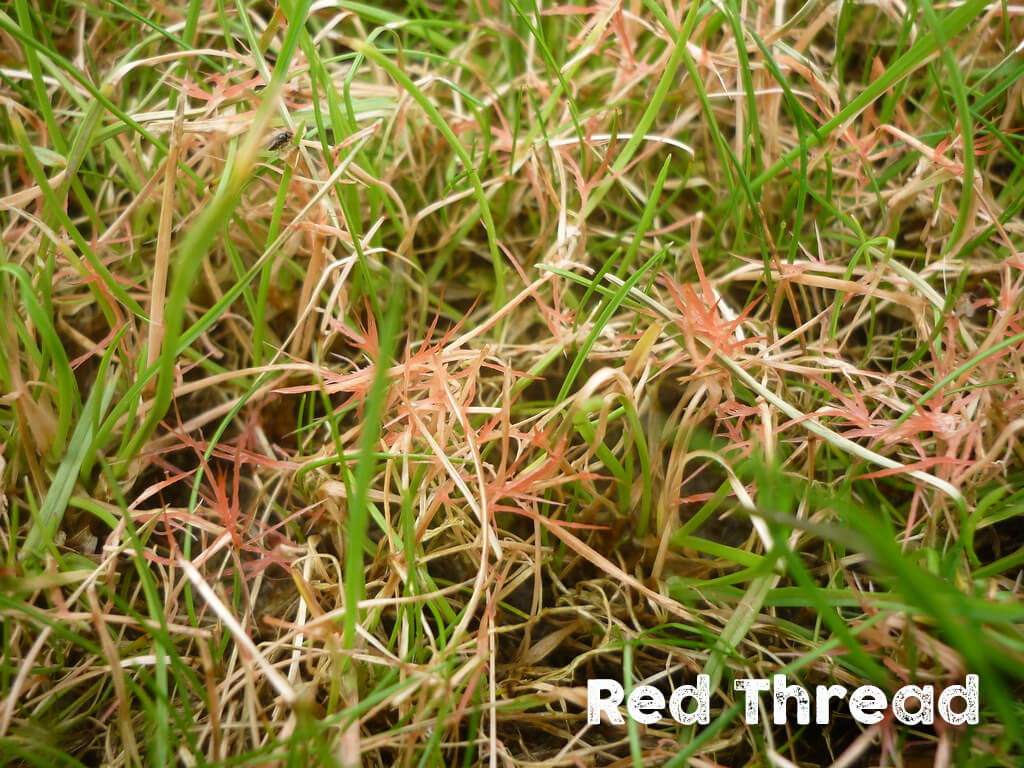 Fusarium Patch, sometimes called snow mould, is a common fungal disease that can occur in autumn or early spring after long lying snow has melted. The first sign that you may have trouble is a small patch of yellowing grass which increases in size to about 1ft across. Multiple patches may form and merge together effecting a large area.

Curing this disease can be quite difficult so steps should be taken to prevent infection. Avoid walking on the lawn if there is heavy frost or snow on it, spike the turf regularly and don’t apply a nitrogen rich fertiliser in late autumn and winter. 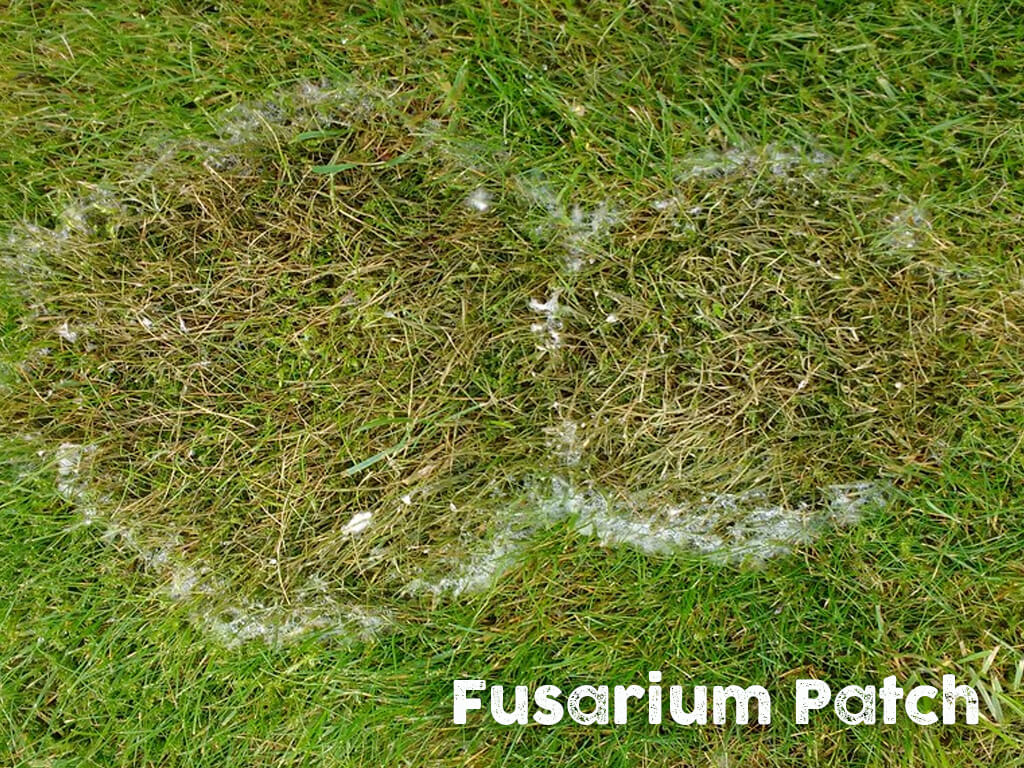 Dog urine can be a real pain in your garden and often damages or kills grass in fairly large patches. Stopping your dog from using his or her own bathroom is likely impractical, but there are more realistic ways to tackle this problem. Keeping moisture on your lawn is the best way to reduce the risk of scorching, similar to when applying a fertiliser. The use of sprinklers should alleviate any threat, during dry spells turn them on once or twice a day wherever your dog urinates.

Leatherjackets are the larvae of flies known as crane flies, commonly referred to as daddy-longlegs. These larvae are tubular in shape and are greyish brown in colour. They dwell in the surface layer of soil and can cause grass to turn yellow and die. These symptoms are common in lawn diseases so to distinguish the cause, it is best to lift the affected turf to see if grubs are present. There are several species of leatherjacket that feed off the roots and stem bases of grass, however most species of crane fly do not damage plants and actually assist in the nutrient cycle. Leatherjackets can be biologically controlled using Steinernema feltiae, a nematode which is watered into the soil in September or early October.

Often called fertiliser burn or scorching, this results in the discolouration of grass leaves due to over-application of fertiliser. The best way to avoid this problem, is to ensure fertiliser is watered in correctly and granules dissolve into the soil soon after application. Particular care should be taken in warm, dry weather. If you suspect you have over-fertilised an area, then the best plan of action is to scoop up as much of the excess as you can and apply plenty of water to the area over the next few days. Be careful to avoid run-off though, as this can cause significant damage to the environment.

Fairy rings refer to the fungal infection that cause circles of dead grass and/or toadstools to appear in your lawn. The most damaging fairy rings are called Marasmius oreades, which live in the roots of turf and produce toadstools, mainly in late summer and autumn. Most of the fungi linked with this problem show no symptoms and are only noticeable if toadstools appear. Due to the nature of this group of fungi, the best way to deal with them is to spike the lawn and water regularly. This breaks up the water repellent properties of the colony and leaves it vulnerable to moisture. Feeding with a fertiliser will also strengthen the grass and further reduce the threat of infection. 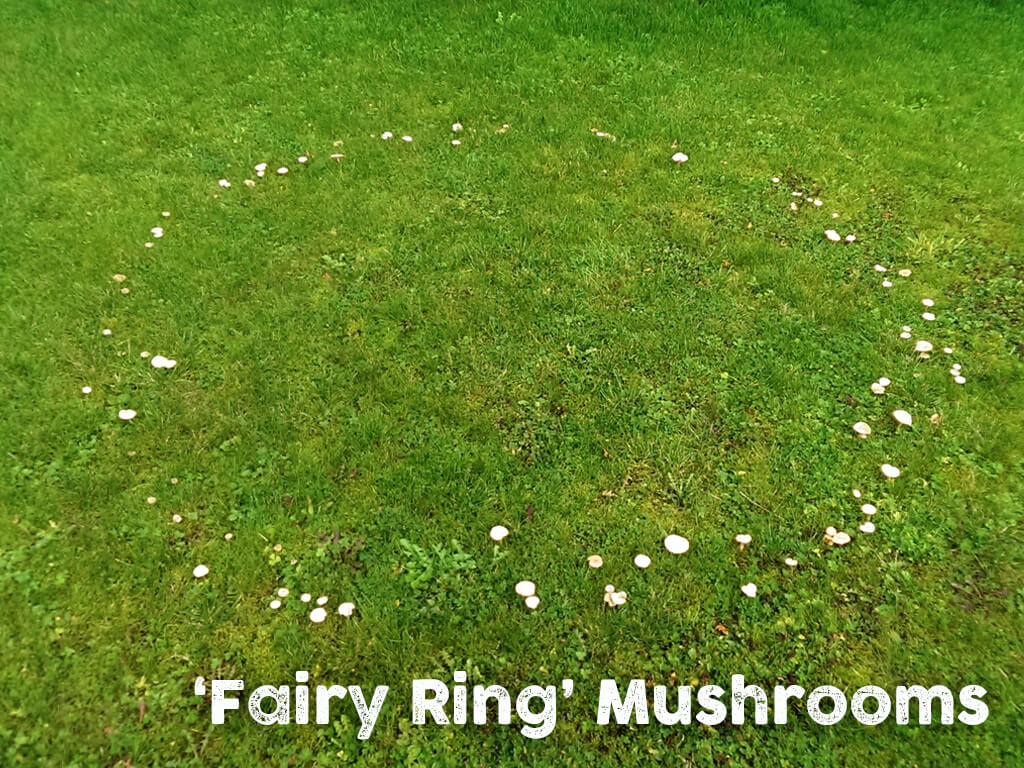 Funnily enough, slime moulds in your garden are not the same as the ones you may find at the back of your sofa when the kids have concocted one of their latest purple sparkly slime creations! Parents - we salute you. Slime moulds on your lawn can appear very quickly, sometimes overnight. The symptoms vary depending on the particular species, however the most common look like grey/black pin heads covering the grass blades, a crumbly yellow mass, or a yellowish cushion. The good news is that these moulds do not damage plants and often disappear as quickly as they appear with no need for any control. If the mould is particularly unsightly, a blast of water will disperse it with ease.

Of course, if you discover something in your lawn that doesn't sound like any of these - you can contact us and send us photos for our experts to identify what's going on!